Microsoft Had To Do Something So They Created Windows 8

Microsoft launched Windows 8 on October 25th. The event location was Pier 57 in New York City. Microsoft would be publicly unveiling its most important operating system since Windows 95. Why is Windows 8 is so important? Microsoft has only a 1% mobile market share and hasn't been able to transform itself into the more relevant mobile computing world we live in today. I would argue that it's emphasis on an operating system has locked Microsoft into a rigid point of view. The focus of the Windows 8 launch event clearly demonstrated this.

Microsoft made a bold move through making a massive switch to touch screens, apps, and a totally revamped user interface. Windows 8 is here, and so far the verdict seems to be that although it is initially confusing and requires a fairly steep learning curve, the system is very good, and definitely worth the extra time you will have to spend in getting used to it.

So if you are a business user, don't switch to Windows 8 during the work day. Leave it for the weekend.

Despite the largely positive reviews of professional reviewers, the early consumer verdicts seem to be comments of frustration rather than excitement.

This is going to be a big shock to the system and some have argued that an incremental strategy, similar to Apples convergence of iOS with Mac OS would be a better approach. But Microsoft made their choice and we will have to see if it paid of. It was a bold risky move. But that's Microsoft. They arrogantly barge in and enforce their vision onto us. The same was true for Windows 95. Why would it change for Windows 8.

What Microsoft has forgotten is that people have choices now. Choice of dievices. Choice of apps. Choice of how they interact with their devices. The old operating system launch that enforces a user expeirence onto it's user base isnt going to work in the current universe.

Apps? Where Are They?

One of the most critical questions that's been hanging over Windows 8 concerns Windows Store apps—and the lack of them. Apps have been integral to the success of Apple's iPad, and they're a primary reason why the iPad continues to gain momentum while Android tablets receive relatively little consumer love.

This argument is a bit lame in my opinion because you have to give developers time to build apps. And there is no doubt developers will build them. But Microsoft has some major catching up to do, especially when compared to Apple. But they knew that going into the launch. It is no big surprise for anyone. But Microsoft didn't talk about apps.

Everyone was expecting to hear a big story about apps at Microsoft's keynote launch event. Many were waiting for announcements about new app partnerships. We wanted to know which critical, popular apps already available in other tablet ecosystems will consumers be able to download at launch?

How Quickly Will The Selection of Apps Grow?

There are big questions about how quickly the selection of apps will grow?

Microsoft, skipped over all of this discussion. In fact, all anyone heard was a downplayed comments about the number of available apps. Balmer told a tall tale of developers flocking to Windows 8, but gave no word on any big new titles. Netfix and Hulu Plus are known to be coming soon. 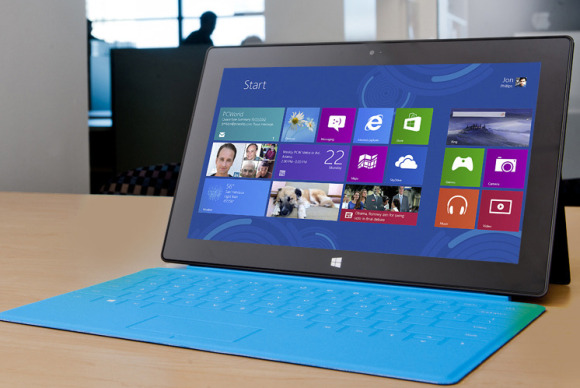 What about gaming apps? Microsoft said there has been a lot activity among game developers, but gave no specific details. Microsoft makes Xbox so it seems odd that they could not use the event to build a bridge between their Xbox success and the potential great gaming titles for Windows 8. Unfortunately Microsoft lost another great promotional opportunity by sharing no details.

Microsoft Promotes An Operating System Not An App Experience

Microsoft may be waiting for the upcoming developer event in Seattle next week to talk about apps.

Microsoft appears to be out of synch with the relevance of apps by focusing on a monolithic operating system launch rather than presenting the app experience which is more relevant to today's audiences. Microsoft is still promoting an operating system while Apple promotes a user experience for apps on a mobile device.

Microsoft had a huge opportunity to get the word out that apps for Windows 8 are here, with more coming soon. This news would be especially relevant to would-be buyers of Windows-based tablets.

Without a clearer vision of the app story, consumers will be cautious to open their recession-battered wallets to buy Microsoft's new OS.

I would argue that users don't want to buy an OS, they want to buy into an app universe. Microsoft is stuck in an operating system business model that just isn't going to work well in the modern mobile landscape.

Microsoft got it wrong. Let's hope they learn from this mistake and fix it soon.

Apple gets into the streaming music business with Apple Music