Canadians are spending a larger percentage of their budgets on cellular phones and Internet access.

Since the launch of cellular services in the mid-1980s, mobile phones have largely been a complement to the traditional phone line – but that is beginning to change. Recent statistics show that more Canadians have chosen to make their cell phone their only means of communication. In 2009 it seems that everyone has a cell phone, from the teenager discussing after-school plans, to the businessperson checking into the office or with clients. In fact at the end of 2005 there were 16.6 million subscribers to mobile communications services. [6]

There is no doubt that mobile technology is here to stay, growing in popularity and is overtaking traditional wireline data and phone services. The trend has only strengthened to 2009 based on other independent reading.

Canadian consumers are spending a higher percentage of their total expenditure on wireless communications. This combined with the decreasing importance of spending on wireline technologies, suggests that Canadians are placing a higher priority on wireless access when compared to traditional wireline access.

In addition, the increase in wireless subscribers, population and households, along with the decrease in the number of wireline connections, supports the hypothesis that Mobile technologies are replacing home phones and wired Internet connections. (Cimeron McDonald, SIEID, Statistics Canada) [6].

The trends represent a change in lifestyle that has created a negative perception of wired services, similar to feeling chained to a desk. Canadians want the freedom, convenience, and flexibility of wireless services. This is a shift in lifestyle and the infiltration of the technology into the daily patterns of the lives of Canadians.

In 2006, wireless subscriptions increased by 14.0% to 19.1million subscribers, resulting in more than 58% of Canadians having a cell phone.

The following data is from the Statistics Canada Report “Literacy and Digital Technologies “ (December 2005) [3]. This data tracks the penetration of various technologies in the homes of Canadians between 1997 and 2003. The trend have continues into the late 2000s with Internet penetration increasing and home phone landline declining. Some reports have found a growing length of time spent online that has eroded typical prime-time TV viewing habits. This trend will continue as Mobile technologies speed up and become cheaper. The trends strongly suggest that a natural migration from wireline High Speed Internet to Mobile Internet is taking place. Internet-based entertainment including Internet Video and Internet Radio are poised to replace traditional Television-based entertainment. Internet Broadcasting is growing in importance and popularity. For example, Sirius Satellite Radio and most TV channels offer a streamed video or audio version of their content. iTunes also now offers pay-per-view TV Shows and Movies. There is no question; Internet Broadcasting will continue to increase in market size.

The Internet in Canada is a mass medium that continues to grow steadily with over 23,000,000 monthly users and roughly 20,000,000 daily users, the vast majority of Canadians have come to rely on this medium for news, entertainment, research, commerce and communications.

Canadians have also led the world in consuming all types of content and media formats online, including online video. Of the five countries currently reported by comScore Video Metrix, online video had the highest reach in Canada, where over 19-million viewers viewed a video online in December 2007, representing 89% of the total online population age 15 and older. 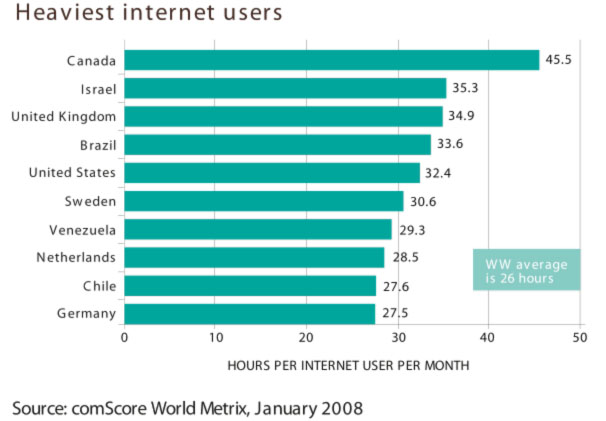 Credit for this exceptional amount of usage has been attributed to a high level of Internet connectivity, broadband access and a wealth of available content. To quote Karin Von Abrams, senior analyst at eMarketer and author of the “Canadian Online Advertising” report, “The country has one of the best broadband infrastructures in the world and higher household Internet penetration than the United States. The online population is engaged, tech-savvy and independent-minded.”

There is great debate at the CRTC regarding the development of regulations for Mobile Internet Services, nevertheless, the services exist and are flourishing while the legislation is being developed.

Another strong indicator of the future of Mobile Internet Technology is to look at the capabilities of existing Mobile Devices as well as the Internet services Mobile Carriers are providing to their customers today.

Mobile Carriers have done their research in this highly competitive market. In this section we will survey the mobile devices and Internet Packages to extrapolate what the Mobile Carriers perceive the current market to be (see Appendix A for the raw data).

Devices capabilities in the Mobile Market are a delicate balance of price, performance, application availability, and speed. Mobile Carriers are fully aware of the price conscious nature of consumers and there is tremendous competition in the marketplace for devices.

SmartAirMedia conducted a Primary Research Survey of the latest devices offered by Rogers was conducted in the consumer, business, advanced business, and entry-level phone categories. Data was provided by surveying Rogers Mobile websites for mobile devices available, see Appendix A for full details. This represents the full range of device types offered by Rogers in October 2009.

All the mobile devices in the market survey supported video, audio, and advanced web browsing. Mobile Carriers are now only selling devices that support advanced video and audio high-speed network playback. The market for mobile video and audio broadcasting will grow since all new devices in the survey supported the capabilities required to playback Internet Broadcasting content on a mobile device.

Comparing the Kindle Paperwhite to the Kobo eReaders