Apple is experimenting with designs for a watch-like device that would perform some functions of a smartphone. Apple has discussed such a device with its major manufacturing partner Hon Hai Precision Industry, one of these people said, as part of explorations of potentially large product categories beyond the smartphone and tablet.

The New York Times recently reported that Apple is experimenting with wristwatch-like devices.

Foxconn, as Hon Hai is known, has been working on a spate of technologies that could be used in wearable devices, one of these people said. In particular, the Taiwan-based company has been working to address the challenges of making displays more battery-efficient and working with chip manufacturers to strip down their products. The technologies are aimed at multiple Foxconn customers, this person said.

Capabilities that Apple is exploring for wearable devices remain unclear. But analysts and investors who have been tracking the field predict the company would release a product with many different functions and that the device would work closely with its iPhones and other devices.

Wearable devices are of growing interest to companies looking for growth beyond the smartphone market, which is already maturing in countries like the US. As core calculation and communications technologies shrink—and sensors that gather various kinds of information proliferate—companies are looking to embed computing in a broader array of devices.

These devices are expected to gather and transmit information automatically and will be more practical than phones or computers in some situations.

Devices worn on the wrist are one hot area, with companies like Jawbone and Nike selling activity-monitoring models.

Google has been showing off prototypes of wraparound glasses that display digital information, like directions, in front of a user's eyes.

The wearable devices trend will only strengthen as electronics, screens, and sensors shrink and consume less power.

The LunaTik (lunatik.com) is one iPod nano wristwatch add-on. This is picture in this article. 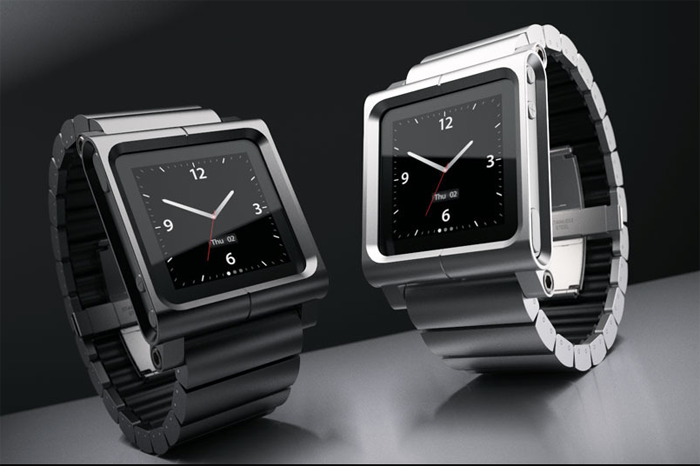 A friend of mine started wearing HIS Nano on a custom strap that turns it into a (very chunky) wristwatch that will only tell you the time after you wake the display.

Canadians now use the Internet more than they watch TV: Broadcasting has entered a new era in Canada

Computers on small sticks that plug into your TV's HDMI port: Chromebit versus Intel Compute Stick